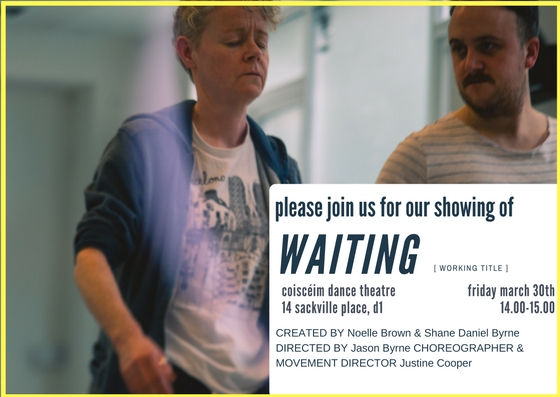 In February 2018, thanks to development from the Arts Council of Ireland and Dublin City Council, Noelle and Shane Byrne begin devising work on a movement memoir with the working title Waiting. Working with Choreographer/Movement Director Justine Cooper and Director Jason Byrne they created and presented a showing of work at CoisCéim in March 2018.

Thanks to kind support from Axis Ballymun and the Riverbank Arts Centre Newbridge in April 2018 Noelle was able to host two workshops for her play Jigsaw.

In April 2018 Noelle and actor/writer Karen Cogan were chosen as co-playwrights on the next stage of Fishambles A Play for Ireland. Their host venue is the Everyman Theatre in Cork.

She is part of the Dublin Fringe Festival’s Hot Desk initiative for artists in 2018.

In January, Creaking was presented as a staged reading at Newbridge Arts Centre as part of the First Fortnight Festival.Creaking will be part of the Bealtaine Festival 2017 and will be touring to Glór Ennis, Everyman Cork, Garter Lane Waterford, Linenhall Castlebar, Axis Ballymun and Draiocht Blanchardstown. With director and co-creator of Creaking Oonagh Murphy, she will work with groups of local volunteers at each venue.The local volunteers will then form part of the cast of a staged reading of Creaking. Noelle was a writer for this years 24 Hour Plays at the Abbey Theatre. She will also be performing in Monday’s Child by Brendan Murray with Barnstorm Theatre Company on its UK Tour in April 2017.

POSTSCRIPT, written by Noelle and Michèle Forbes and in which Noelle performs, will be presented in the Peacock at the Abbey Theatre from June 14th to 24th 2017. Use this link to book tickets http://www.abbeytheatre.ie/2017/peacock

After several development workshops during 2016/2017 with Barnstorm Theatre Company Noelle is currently writing a play for young people entitled Jigsaw which explores the theme of inter country adoptions.

Work in progress promo for Creaking.